In March 2015 Professor Vincent F. Hendricks was awarded 14.5 mio DKK (1,92 million Euros) by the Carlsberg Foundation to fund the Center for Information and Bubble Studies (CIBS). At the moment the center is gradually growing in size.

The common way of understanding bubbles in scientific thinking is in situations of finance, but Professor Vincent F. Hendricks and his staff take the bubble template and apply it to other situations. “You invest everyday. For instance on social media you invest your opinion in various posts or likes. Investing in political programs, religious stanzas or social capital is something that we do everyday. You can overheat financial assets, but you can also overheat political assets, religious assets or other sorts of assets, which can create political bubbles, social capital bubbles or science bubbles.” explains Hendricks.

The Center for Information and Bubble Studies (CIBS) will look at the mathematical structure and dynamics of these bubble phenomena and try to answer questions such as what do you do with these bubbles once they are there? Could you intervene? Are there good bubbles or malignant bubbles or are all bubbles malignant and some benign? CIBS, which will be located at the Department of Media, Cognition and Communication at the Faculty of Humanities, will be an interdisciplinary center that will look at mathematics, economics and logic as well as philosophy, information theory, social psychology and behavioral studies. 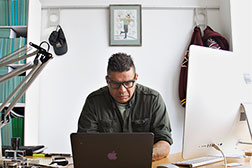 A few months back Hendricks began hiring the first bulk of scientific personnel. The first two PhDs have been hired and Vincent states that “there is much more in the works”. This spring the two first postdocs will be employed. The funding from the Carlsberg Foundation covers yet another two postdocs and PhDs whom CIBS plan on hiring in a year or two, but according to Hendricks this is just the fundamental research part of the project. “There is a more applied part of the project that has to do with science bubbles on one hand, and how you intervene in some bubbles on the other hand when it comes to public opinion or health issues, health wealth and happiness”. Hendricks plan on funding these two legs of his “three-legged creature” with help from other private funding agencies that have shown an interest in the new center. “So, if all goes well in a couple of years, we will be running on a different budget yet again and then it will be eight PhDs and eight postdocs, plus the core group, plus research associates and affiliates and what not. So if everything goes well, in a couple of years, maybe three, we are talking about 25-30 people” declares Professor Vincent F. Hendricks.

The center has already great many people working as associated researchers and several students are writing their assignments at the center. Find the full staff list on the centers website bubblestudies.ku.dk.

The future for CIBS

The initial funding from the Carlsberg Foundation is for five years, but Hendricks has no doubt that the center will continue to grow: “We are definitely determined to continue to attract funding for a good number of years and the idea is also of course that this will be embedded in the faculty as such in due time”

Hendricks also emphasizes the importance of the university students whom he plans will be very much involved in CIBS. Already Hendricks has had students volunteering to work for the center, and Hendricks also hints at a possible future with CIBS courses for the students: “Eventually we will also see if we will get to do courses. There is a multiplicity of things where this is going to be embedded on the research part, but also on the educational side of things.”

The Center for Information and Bubble Studies is situated at the Department of Media, Cognition and Communication, Faculty of Humanities at the University of Copenhagen and will officially open in the beginning of 2016.